The Man and the Snake by Ambrose Bierce. 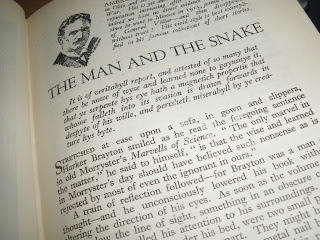 Ambrose Bierce was a veteran of the American Civil War, who became better known as a writer on the event of his death. Not that his death was ever recorded, as he joined General Villar in Mexico in 1913 and then disappeared without a trace.

‘The Man and the Snake’ is one of those short stories where you are left to make up your own mind as to what actually happened.

The story begins with Harker Brayton reading a passage for a book called ‘Marvels of Science’. Brayton scoffs at the passage which tells the reader that snakes have a way of drawing their pray under a spell before they bite them. The book is a borrowed book from his host Dr. Druring, whose avid interest in snakes has led him to build The Snakery on his property, which houses his most prized species.

As Brayton reads on, he gets the feeling that something is watching him. After a couple of quick glances under his bed, he becomes frozen to the spot when he realises he has come face to face with a snake. He tries to identify the snake from his knowledge, but finds this he can’t. His mind races as he tries to work out whether it will kill him by venom or by constriction. He attempts to move slowly away from it, but his feet lead him closer and closer to the snake.

Downstairs in the library, Dr Druring and his wife are shocked to hear screaming from upstairs. They rush to Brayton’s room only to find him dead. Whilst examining the room for evidence, Dr Druring discovers a stuffed snake hidden under the bed.

How did Brayton die?

Personally I felt that he let his imagination get the better of him as he was so drawn into what he had been reading. Knowing that snakes lived in the house, he managed to convince himself it was real. Shock can do funny things to people, and I believe that Brayton died of shock.

However, from the way the story ended, this could be one of many solutions to the twist at the end. You will have to read it yourself to make up your own mind.

Ambrose Bierce was a talented a writer, who created clever twists, leaving the cause of death unanswered.

If you would like to read the story for yourself, you will find it here
at February 04, 2011