Not only does my wonderful book of mystery contain forgotten authors but it also contains some legendary figures such as Wilkie Collins.
Wilkie Collins was one of Charles Dickens's closest friends and was the first Englishman to write a full length detective novel. His more well known works included 'The Moonstone' and 'The Woman In White' which are both now regarded as classics in English Literature. 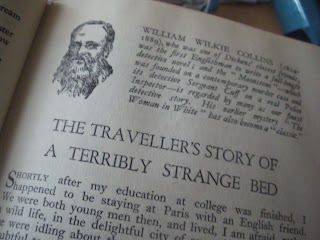 The Traveller's Story Of A Terribly Strange Bed by Wilkie Collins

This story is told as a tale to an avid listener. A young man is desperate to enjoy a little gaming amongst the poor during his visit to Paris.  Whilst on a drunken winning streak, an old soldier congratulates him on his good fortune. However the soldier is worried that the young man may be taken advantage of in his drunken state and brings him coffee to help him sober up. The coffee has the complete opposite effect on the man, resulting in the soldier calling upon the staff at the gaming house to provide the young man with a bed for the night.  The young man feeling the worse for wear, jumps at the chance of a bed.  Only to realise that the bed may provide him with his last sleep.

I have yet to read a book by Wilkie Collins and I have to say that this short story has whetted my appetite. I have always been a little in fear of his books, imagining them to leave me dazed in whirl of unintelligence.  However, I found this story easy to read and very absorbing.  In such a short story, my empathy towards the young man occurred quickly. He seemed a genuinely nice character, who wanted to play purely for enjoyment and not monetary gain. I could see that he was about to be the centre of a rather cruel hustle and felt fearful for him in advance.

I was a little dazed by the gaming references, but that is purely because gaming of any sorts hold no interest to me what so ever, so I did find myself skimming  those paragraphs.

This story breathes out a sinister atmosphere and creates a dark Victorian scene.  The ending was a little too clean cut for my liking, but I did enjoy the comical tones of the last paragraph emitting the sort of humour that appeals to my hidden comedian.

If you would like to read this story for yourself, you will find it here.