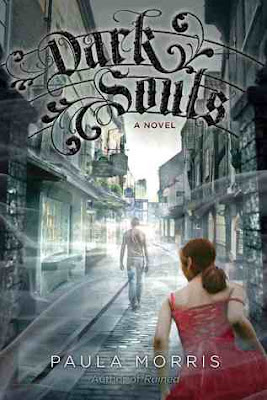 Dark Souls by Paula Morris. Published by Point in August 2011. I don't think there is a UK publisher for this authors books, but there should be. I read Ruined last year and absolutely loved it.

I can't wait to get my hands on this one.
Goodreads Summary
Welcome to York, England.
Mist lingers in the streets.
Narrow buildings cast long shadows.
This is the most haunted city in the world. . . .
Miranda Tennant arrives in York with a terrible, tragic secret. She is eager to lose herself amid the quaint cobblestones, hoping she won’t run into the countless ghosts who supposedly roam the city. . . .
Then she meets Nick, an intense, dark-eyed boy who knows all of York’s hidden places and histories. Miranda wonders if Nick is falling for her, but she is distracted by another boy — one even more handsome and mysterious than Nick. He lives in the house across from Miranda and seems desperate to send her some sort of message. Could this boy be one of York’s haunted souls?
Soon, Miranda realizes that something dangerous — and deadly — is being planned. And she may have to face the darkest part of herself in order to unravel the mystery — and find redemption.

Having twin girls myself, I find myself constantly drawn to books about them. I recently read Rochoholic by C.J. Skuse and absolutely loved it. I will be reviewing it later in the year as part of the Death and Bereavement month.
Goodreads Summary
Sixteen-year old twins in Candy-Store crime spree. Twins, Paisley and Beau Argent are in the headlines again. Last time, they were the 'wonder twins', when as six-year-olds they were found alive in woods after three days missing following their mother's death -three days spent looking for their dad. Now at sixteen, life's not so wonderful. Out-cast and exploited by their money-grabbing grandmother, they're still clueless about their dad's whereabouts. Until they discover an old letter from him. That's when they decide to hit the road - and make headlines again. Holding up fast-food joints might seem extreme but if they can get on the news, and tell their dad they need him, they might get the dream reunion they thought could happen.
at May 28, 2011

Email ThisBlogThis!Share to TwitterShare to FacebookShare to Pinterest
Labels: cj, on my wishlist, paula morris, skuse