**********
I know I have probably shouted and hollered about this book a few times now - I know I have definitely mentioned it this week already, but I don't care! Once a book obsession takes over, there is no stopping me. 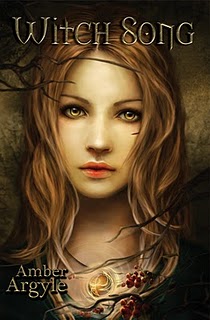 Witch Song by Amber Argyle
Published in September 2011 by Rhemalda Publishing.
Goodreads Summary
The world is changing. Once, Witch Song controlled everything from the winds to the shifting of the seasons-but not anymore. All the Witches are gone, taken captive by a traitor. All but Brusenna. As the echo of their songs fades, the traitor grows stronger. Now she is coming for Brusenna. Her guardian has sworn to protect her, but even he can't stop the Dark Witch. Somehow, Brusenna has to succeed where every other Witch has failed. Find the traitor. Fight her. Defeat her. Because if Brusenna doesn't, there won't be anything left to save.
**********

Witch Eyes by Scott Tracey
This one caught my eye earlier this week and I fell in love with it.
This is being published by Flux in September too.
Goodreads Summary
Seventeen-year-old Braden was born with witch eyes. He has the ability to see the world as it truly is: a blinding explosion of memories, anguish, darkness, and magic. The power enables Braden to see through spells and lies, but it comes at the cost of horrible pain.
After a terrifying vision reveals imminent danger for the uncle who raised and instructed him, Braden is lured to Belle Dam, an old city divided by two feuding witch dynasties. Rival family heads Catherine Lansing and Jason Thorpe are desperate to use Braden's powers to unlock Belle Dam's secrets, but Braden refuses to become their sacrificial pawn. His resolve is tested when he learns that Jason is his father—and that Trey, the enigmatic guy he's attracted to, is Catherine's son.
To stop an insidious dark magic from consuming the town, Braden must master his gift—even if the effort destroys him.
***********
What books are you wishing you had?
at June 11, 2011