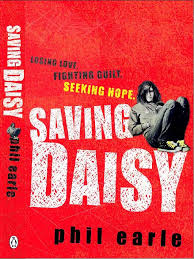 Pages - 338
Published by Penguin Books
'My name is Daisy Houghton.
I'm fourteen years old.
Six months ago I killed my dad.
Goodreads Summary
Daisy’s mum is gone. Her dad refuses to talk about it and as far as Daisy’s concerned, it’s all her fault…
Saving Daisy is a powerful and moving story that follows the life of Daisy Houghton who first featured in Phil Earle’s critically acclaimed debut, Being Billy.
As Daisy struggles with misplaced guilt over her mother’s death, she turns to extreme and violent measures and soon her life starts spiralling out of control. This leads to tragedy and suddenly Daisy finds herself left all alone. But sometimes the kindness of a stranger can turn things around. A stranger who desperately wants to save Daisy – if she’ll only let herself be saved.(

**********
Phil Earle is not an author to hold back. When he writes, he takes hold of real issues that affect teenagers and thrusts them into awareness. Saving Daisy is a gut wrenching, gritty realistic read that pulls no punches. Phil writes about real life issues we try and forget exist.
Saving Daisy is a companion novel to Being Billy, which I really enjoyed reading last year. With Phil's books you feel bad, saying you enjoyed them because they deal with children in care who suffer, but Phil really brings his characters to life, so that you feel like you know them so well and you are cheering them from the sideline to be one of the children who survive the system and come out winning.
I loved Daisy even more that Being Billy, it was so nice to see her journey before she reached Billy's world. This girl really suffered from guilt and had to learn that the events of her life were not her fault,  she was just one of the unlucky ones who found herself in the wrong place at the wrong time. On reflection after reading the book, I wondered how many children in the world live with a similar guilt, who feel responsible for the death of their parents, when in reality it wasn't their fault. Phil really expresses and explores Daisy's life in detail and you feel privileged to be able to watch her journey of survival. I was extremely impressed by Phil's ability to write from a female perspective, something which I felt he captured accurately. I actually felt like I was in Daisy's head. I could  see everything from her point of view and understood completely where she was coming from.
This book covers many issues that children in care often face, including  self harming and adults grooming children. In this story, Daisy has an encounter with one of the supply teachers which made me feel quite sick. The way adults can manipulate children like this to thinking it is their fault and how bad it would be to them if it all came out, really kicks me the gut. This is one area where I find so difficult to read about, but it seems so much more common than we realise.  Self harming is an issue that  I have never really understood, however this book made it all so much clearer to understand.
After finishing and reflecting about Saving Daisy, I now feel the need to go back and reread Being Billy, to remind myself how well Daisy turned out in the end. She really is such a strong character who heroically comes back from the brink of depression to see that life is actually worth living,  with the help of Ade,. Daisy combats her demons, which would send most sane adults on  the road to insanity. Ade is an exceptional character in this book and makes key workers look brilliant. Without her help, I am not sure whether Daisy would have been able to come back.
Saving Daisy broke my heart and opened my eyes. It made me think and stayed with me long after I had finished reading it. Within just two books, you can see how much Phil has progressed as a writer. I will be first in the queue for his third book.  A very real, gritty book that all teenagers should read.
at January 10, 2012