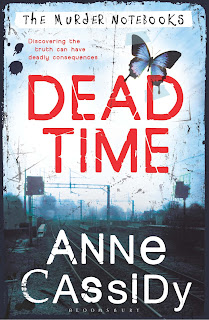 Bloomsbury 10th May 2012
Rose looked at the blood on her arm. She held it under her bedside light and saw pinpricks of red across her skin. She blotted them with a tissue, then watched as a shape emerged; tiny ruby bubbles that looked like jewels and formed a raw outline of gossamer winds. Rose carefully unrolled the sleeve of her shirt and covered the wound, letting the cuff hang. She hoped the blood would dry soon. Tonight, of all nights, she didn’t want any trouble with her grandmother.
Her arm was still painful, though.
Think about something else, she told herself sternly, think about meeting Joshua, about getting out of the house without her grandmother knowing where she was really going. Think about keeping her butterfly private, covered up with a sleeve. The man in the tattoo parlour had told her to leave the dressing on for five days but she hadn’t been able to wait. She’d wanted to take it off in time to see Joshua. And now she’d made it bleed.


Goodreads Summary
One night Rose’s mother and Joshua’s father went out for dinner – and never came back.
Five years later Rose and Joshua meet again. Rose has just witnessed a brutal murder and Joshua is trying to find out what happened to their parents. Together they discover a mysterious notebook with cryptic messages inside – which might hold the answers to everything. Sometimes the truth is better left buried, but the murder notebooks have to be read – even if it’s a matter of life and death.

***********
First things first, I totally loved this book and read it in two sittings which for a mum of two who also has umpteen animals to look after should say something. I was hooked immediately and couldn’t wait to find out ‘whodunnit’ and what was going to happen next. However, the synopsis on the back of the book doesn’t quite tell the whole story. Rose does witness a brutal murder and this is a key part to the story, the bit about finding the notebooks is what will link this title Dead Time to the others in the Murder Notebooks series. I say this now because I kept waiting for the notebooks to emerge while all the time another plot was unravelling before my eyes so don’t be deceived by this.

So back to the beginning, Rose, 17 lives with her grandmother (who is very strict) and attends the local college. We know from the start that she is off to meet Joshua, her stepbrother, whom she hasn’t seen for five years. At the station an incident occurs that Rose is unfortunately drawn into and this is one part of the developing story.

The other part is that Rose’s mother and her partner Brendan went out for a meal five years previously and were never seen again. Joshua is Brendan’s son and he has been setting up websites in order to hopefully find out more information about what happened
to them after their last sighting in the restaurant. Joshua comes back into Rose’s life and draws her into trying to trace their last known moments.

The two parts of the story, Rose’s life at college and her relationship with Joshua work well together. Whilst they remain separate they are also inextricably linked and I think Anne Cassidy worked well with this. I liked the characters: sullen teenagers, a cyber geek and a miserable grandmother who has been dumped with a child she never really knew. The only character that was maybe a little unbelievable is a policeman who turns up later in the book and he just seemed to be trying too hard to be totally real. It was well paced and easy to read. It certainly keep me hooked and all the loose ends were tied up which I always find satisfactory. Is this a wholly realistic novel? No, probably not, but if you like your Nancy Drew style stories of teenagers solving crimes ahead of the police then it will be right up your street. I personally can’t wait for the sequel as now the murder notebooks have been discovered, I want to know what’s in them!
at May 25, 2012