I am so pleased to be one of the few bloggers sharing this with you today. Strange Chemistry want to show you  one of their amazing new covers which will be published in October. 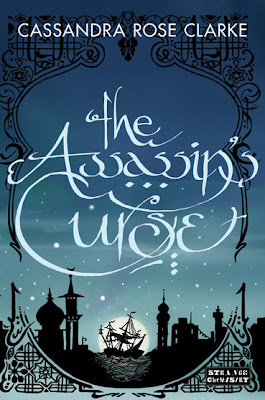 Isn't it gorgeous! I absolutely love this cover!
It is a YA fantasy, but considered to have a huge crossover appeal into an adult audience.
Here is the official blurb about the book.
Ananna of the Tanarau abandons ship when her parents try to marry her off to an allying pirate clan. But that only prompts the scorned clan to send an assassin after her. And when Ananna faces him down one night, armed with magic she doesn’t really know how to use, she accidentally activates a curse binding them together. To break the curse, Ananna and the assassin must complete three impossible tasks—all while grappling with evil wizards, floating islands, haughty manticores, runaway nobility, strange magic, and the growing romantic tension between them.
This novel has echoes of Scott Lynch, Saladin Ahmed and Tamora Pierce. It has a defiant Arabian Nights feel to the story and is all round magnificent.
Many of you will have heard me nattering on about Strange Chemistry's Open Door period, well Cassandra Clarke's manuscript was chosen during the Open Door month with Angry Robot last year. Here is a some more information about the author.
Cassandra Clarke is a speculative fiction writer and occasional teacher living amongst the beige stucco of Houston, Texas. She graduated in 2006 from The University of St. Thomas with a bachelor’s degree in English, and in 2008 she completed her master’s degree in creative writing from The University of Texas at Austin. Both of these degrees have served her surprisingly well.
During the summer of 2010, she attended the Clarion West Writers Workshop in Seattle, where she enjoyed sixty-degree summer days. Having been born and raised in Texas, this was something of a big deal. She was also a recipient of the 2010 Susan C. Petrey Clarion Scholarship Fund.

To celebrate the revealing of this gorgeous cover, Strange Chemistry want to give you all the chance to win an ARC copy of The Assassin's Curse. How would you like to read it before anyone else? Well all you have to do is leave a comment about the cover and leave your email address at the bottom. This is a UK only competition, but I have been assured that there are a couple of American bloggers offering the same prize. A winner will be chosen at random on the 9th May. What are you waiting for?
at May 02, 2012