Britain at it's best, bringing you it's own version of IMM! All the books that came through my letterbox thanks to publishers and Royal Mail! Thank you Mr Postman for not squashing my books. 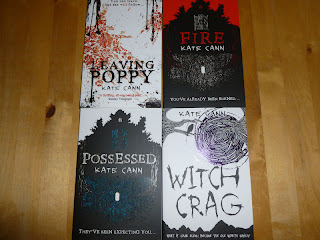 I was over the moon to get   a box full of Kate Cann delights to read from Scholastic. Kate Cann has been on my list of authors to read for a long time and I am hoping to get to these lovelies soon.

Witch Crag is the new novel from Kate Cann, a dystopian novel that will appeal to the fans of The Hunger Games. It is published on the 4th of October, alongside new editions  of Leaving Poppy, Possessed and Fire.  Thank you Scholastic for such fabulous books. 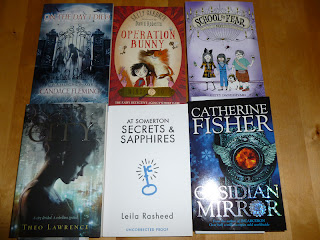 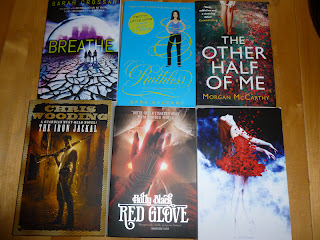 Breathe by Sarah Crossan will be published by Bloomsbury on the 11th October. Sarah has been described as exciting new voice in young adult fiction. Her debut book, The Weight of Water was published in January to high acclaim.
Also from Bloomsbury book, another stunning cover - Dance of Shadows by Yelena Black which can be seen in the bottom right hand corner of the picture. Described as Black Swan meets Gossip Girl, this is the first book in a new series and will be published on the 14th of February 2013 - thank you Bloomsbury for both of these books.
Ruthless by Sara Shepard is the tenth book in the Pretty Little Liars series which is now a major TV show around the world. This will be published on the 4th of October  by Atom. Thank you Atom!
The Other Half of Me by Morgan McCarthy will be published in paperback on the 8th November by Headline. When it was published in hardback earlier this year it received a huge amount of praise. Thank you Headline.
The last two books were kindly sent to me by Indigo, an imprint of Orion Children's Books and will both be published on the 4th of October. The Iron Jackal is the third book in the action packed, wise-cracking series by Chris Wooding. Red Glove by Holly Black is the second book in the sensational Curse Workers trilogy and has been on my wish list for ages. Seriously if you haven't read a book by Holly Black you are missing out. Thank you Indigo.

The books received in this Letterbox Love were received over a period of two weeks and I  didn't get time to write a post last week. I hope you all received fabulous goodies in the post too.
at September 30, 2012