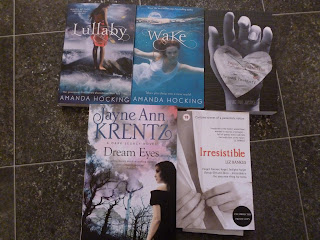 Wake and Lullaby by Amanda Hocking both published by Tor Books which is part of Pan Macmillan.Wake was published in August and Lullaby is published later this month. These are the first two books in the Watersong series. Thank you Tor Books.
Paper Valentine by Brenna Yovanoff is the third book by this author and will be published in January by Simon and Schuster. I feel like I have waited for ages for this book.
Dream Eyes by Jayne Ann Krentz is the second book in the Dark Legacy series and will be published by Piatkus in January. I haven't read the first book but I get the impression it can be read as stand alone. Thank you Piatkus.
Irresistible by Liz Bankes is a debut novel by a fantastic book blogger. The ebook is published now but the paperback version will be published in April.

I also received Requiem by Lauren Oliver which I had forgotten all about! Eeep. This will be published by Hodder Books in March.

Bought
The Vincent Brothers by Abbi Glines was published for 99p for the Kindle this week. This is the uncut version and I quickly rushed to buy it.

Thank you to all the lovely publishers who sent me fantastic books to review. *hugs them all*
at December 16, 2012