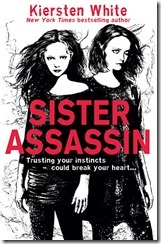 My dress is black and itchy and I hate it. I  want to peel it off and I want to kick Aunt Ellen for making me wear it. It’s short, too, my legs in white tights stretching out too long under the hem. I haven’t worn this dress in two years, not since I was nine, and I hated it then, too.
Pages – 302
Published by HarperCollins Children’s Books in February 2013
Goodreads Summary
She never chose her deadly gift but now she’s forced to use it. How far would you go to protect the only family you have left?
Annie is beset by fleeting strange visions and a guilty conscience. Blind and orphaned, she struggles to care for her feisty younger sister Fia, but things look up when both sisters are offered a place at Kessler School for Exceptional Girls.
Born with flawless intuition, Fia immediately knows that something’s wrong, but bites her tongue… until it’s too late. For Fia is the perfect weapon to carry out criminal plans and there are those at Kessler who will do anything to ensure her co-operation.
With Annie trapped in Kessler’s sinister clutches, instincts keep Fia from killing an innocent guy and everything unravels. Is manipulative James the key to the sisters’ freedom or an even darker prison? And how can Fia atone for the blood on her hands?
*****
I love looking back at the first page after I have read a book and realising exactly how the author used it to set up the plot and the characters. Within the first few pages of this book, we get a strong sense of who Fia is. She is wild, angry and violent at times, yet fiercely protective of her sister Annie. Annie is fragile in one way, her blindness limiting her abilities, but strong in another as she also goes out of her way to protect her sister. I don’t think I have ever seen a stronger sibling bond in fiction. They are like two halves of the same egg shell, strong when together, but completely broken when pulled apart. They appear to struggle without each other and worry incessantly about what happens to each other.
The story jumps back and forth between the past and the present giving us glimpses of how the characters became who they are today. We are also told the story in first person from two viewpoints, which allows us to get into each characters head with ease.
Fia is volatile and on the verge of losing it altogether. She has been made to do things, no one should ever be asked and it has pushed her as far as she can physically go. James is an interesting character, and you watch his interactions with Fia with curiosity, because you are never quite sure of his real intentions. Even at the end, Fia’s reactions make you question whether she actually trusts James or not. Each and every character within the story is flawed, they are all a danger to themselves and others.
The ending of this book is extremely clever. To the point, you have to go back and reread it to make sure you are absolutely clear you read it right, as it is very subtle in its presentation. I do hope there is a second book because all though the ending wrapped up the situation I still felt there were questions unanswered.
This book has a real Mafia style feel to it. It’s a Godfather meets Super Girl kind of story. It felt original in content, in fact, I couldn’t think of any book or series that was similar. Annie and her sister have special abilities which put their lives at risk on discovery. There is a lot of kick ass action as Fia steps up to take a more confident and forceful role. She becomes a very strong character as the book progresses.
For most of the story, I really enjoyed it. I did get annoyed a couple of times when the chapters jumped back and forth, because I found I couldn’t always work out where I was in the storyline, but other than that I thought it was brilliant.This book is fast paced and addictive. Full of kick butt action with fantastic characters.
On reflection of the title and the cover, I will hold my hand up and admit to preferring the US one. I think Mind Games suit it as a title much better and the cover isn’t so fierce. Have a look for yourself and see whether you agree. 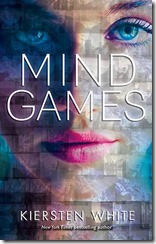