The Oathbreaker’s Shadow by Amy McCullough 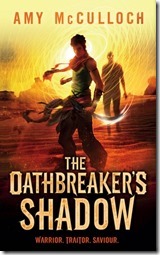 Raim sat in the crook of an old, cracked tree, one leg dangling in the breeze, his head leaning back against the trunk. Long, needle-like leaves shaded him from the oppressive heat and hid him from the view of his grand-father, in case he was looking to assign him yet another chore. He just wanted a moment for himself.
Pages – 405
Published by Doubleday in June 2013
Goodreads Summary
Fifteen-year-old Raim lives in a world where you tie a knot for every promise that you make. Break that promise and you are scarred for life, and cast out into the desert.
Raim has worn a simple knot around his wrist for as long as he can remember. No one knows where it came from, and which promise of his it symbolises, but he barely thinks about it at all—not since becoming the most promising young fighter ever to train for the elite Yun guard. But on the most important day of his life, when he binds his life to his best friend (and future king) Khareh, the string bursts into flames and sears a dark mark into his skin.
Scarred now as an oath-breaker, Raim has two options: run, or be killed.
*****
I was excited about this book from the first time I heard about it and I was really pleased it didn’t let me down. This is an extremely well written, evenly paced action novel that engulfs you and transports you to a world of fantasy.  I can’t believe how quickly I was lost in the story. The premise just blew me away. The idea of promise knots that can be broken to cause someone a life time of misery is just outstanding. Two people make a promise and a knot is tied to represent it. Should the promise be broken, the person would be physically scarred and haunted by a constantly abusive shadow.
The writing is the type that just flows off the page. Each sentence carefully crafted to allow the prose to flow beautifully. It’s the kind of book you want to quote from.
Raim is one of those characters, you instantly admire and care for. On one hand, he is strong and prepared to be the warrior he has trained all his life to be. Yet on the other hand, you see a softer, caring side – a loyal friend and family member, who will do anything to protect the ones he loves. I loved the twist in the relationship between Raim and Khareh, as oaths are finally broken. It was extremely clever how the author portrayed the two opposing versions of Khareh. The emotions of each character are easily identified allowing the secondary characters to stand out just as well as the main ones.
The setting was breath taking. The author has portrayed the imaginary world of Darhan in such intricate detail, that you can easily visualise it.
The story builds in pace gradually to an epic ending. I really was pleased with the way it ended. A stunning work of fantasy. I am so eager to read the final book in this dualogy.
at June 18, 2013