The Elites by Natasha Ngan 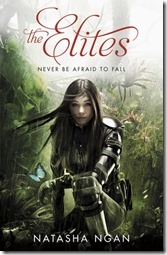 There is a rumour that the Elites don’t bleed.
As the boy stand in the corner of the small, shadowy room, his whole body trembling, he thinks, If only I could be an Elite. Clenching and unclenching his hands, he tries to stop the shaking. An Elite wouldn’t feel anything, he thinks. Then: But I will feel it all.
Published by Hot Key Books on the 5th September 2013
Pages - 368
Goodreads  Summary
Hundreds of years into the future, wars, riots, resource crises and rising sea-levels have destroyed the old civilisations. Only one city has survived: Neo-Babel, a city full of cultures – and racial tension.
Fifteen-year-old Silver is an Elite, a citizen of Neo-Babel chosen to guard the city due to her superior DNA. She’d never dream of leaving – but then she fails to prevent the assassination of Neo Babel’s president, setting off a chain of events more shocking and devastating than she could ever have imagined. Forced to flee the city with her best friend Butterfly (a boy with genetically-enhanced wings), Silver will have to fight to find her family, uncover the truth about Neo-Babel and come to terms with her complicated feelings for Butterfly.
******
I feel like I’ve been waiting to read this book for such a long time. Natasha Ngan has been on my radar for quite some time and  I was intrigued about this YA fantasy novel that dealt with such adult topics as politics, class segregation and rebellion. I was impressed with how the author managed to make a political situation, so action packed and fast paced.
The author has created an intricate and highly detailed world which must have taken a long time to evolve. The world felt real, yet you knew it was really imaginary – if that makes sense. The writing is beautiful – such a strong descriptive voice that breathes life into this world. I could easily imagine what this world would look like.
The book is told in third person, but from three different viewpoints in short tightly packed chapters. There were a couple of times where I found myself getting slightly confused as to whose viewpoint I was reading, especially as the first part of the story is mainly Silver’s, but I soon worked this out. The story shows the contrasting lives between the Elite and the children living in the slums of Neo-Babel, which really works well.
I loved the relationship between Butterfly and Silver.  They had known each other all their lives and were only just beginning to realise how they felt. As the romance gently blossomed, it was good to see that it didn’t take centre stage to the main plot revolving around finding out why Silver’s parents disappeared and where they went. In fact, it made an interesting minor plot line.
On the whole a beautifully written debut with stunning imagery and an action packed ending.
at September 19, 2013