The Art of Being Normal by Lisa Williamson 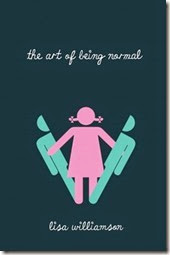 This is the book I recommended for the Top Ten Books of 2015, which is posted on Tombola Times, the sponsors of ITV's Loose Women. Click here to read the rest of the list.
One afternoon, when I was eight years old, my class was told to write about what we wanted to be when we grew up.
To be published by David Fickling Books in January 2015
Pages - 368
Two boys. Two secrets.
David Piper has always been an outsider. His parents think he’s gay. The school bully thinks he’s a freak. Only his two best friends know the real truth – David wants to be a girl.
On the first day at his new school Leo Denton has one goal – to be invisible. Attracting the attention of the most beautiful girl in year eleven is definitely not part of that plan.
When Leo stands up for David in a fight, an unlikely friendship forms. But things are about to get messy. Because at Eden Park School secrets have a funny habit of not staying secret for long…
******
This book had a rather topical subject to deal with and I can only say that the author did it with dignity and sensitivity, creating a cracking yet heartfelt story. This is the first transgender story I’ve ever read and I really hope it won’t be the last. If I am honest, I’m hoping for a time when transgender characters can be a norm in fiction rather than star as the story itself.  With diversification in YA surging forward, I really am excited to see what the future holds for YA.
I am definitely on the train that can’t wait to see everyone open their arms wide to accept that transgender people are just like everyone else and have exactly the same rights to happiness and acceptance in society. I am one of those people applauding Brad and Angelina Pitt as they support their child’s desire to be a boy. I really don’t think this book could have come out at a better time.
So back to the story itself. I found it completely  gripping from the very start. You cannot help but want to hug and comfort David as he struggles with his ever changing body, developing into the man he doesn’t want to be. He is one of the lucky ones though, as his parents are quite liberal and open to his choices, which becomes apparent as the story unfolds. I adored the growing friendship between Leo and David, as they learnt to trust in each other. Leo came across as a wise and protective brother figure, as he helped David to adjust.  Friendships like that are to be embraced and worn with pride.
The book is told from a dual perspective and both characters tell their story in first person. It was fascinating to see the different lifestyles of both characters and how their surroundings and the people close to them affected their decisions and their mind-set.
There is humour, there is sadness, but they are weaved so beautifully that you are never down for long in the story. The ending would have made John Hughes proud and I bet if he was around, he would be desperate to make this book into a film. I swear I could hear the music playing at one point during the final chapters.
I think this book will be talked about widely within the YA market. It will be the transgender book on everyone’s lips. There will be other books to follow, of that I am certain; but in my mind, this will be the book that heralded the change in people’s perception of transgender children. I can’t wait to see teenagers reading this and loving it as much as I did.  A huge congratulations to Lisa Williamson for writing such an amazing book and not forgetting,  a round of applause to David Fickling Books for bringing this story into the world.