The Dreamsnatcher by Abi Elphinstone 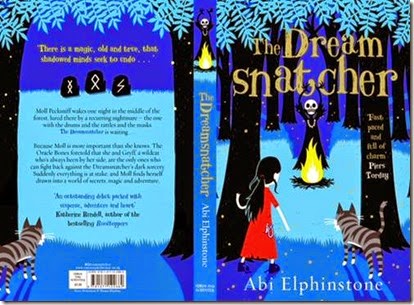 Skull’s voice came, slithering and cold, seeking them out like a chill.
‘Come beast, come child. Come beast, come child’
Moll felt it, as if they’d called them by their names.
The chant was for her and Gryff... She was sure of it. But stranger than all of that was the feeling growing inside Moll.
She almost wanted to step forward, into the clearing towards Skull...
Published by Simon & Schuster UK in February 2015
288 pages
Summary from Publishers
Twelve-year-old Molly Pecksniff wakes one night in the middle of the forest, lured there by a recurring nightmare - the one with the drums and the rattles and the masks. The Dreamsnatcher is waiting. He has already taken her dreams and now he wants her life.
Because Moll is more important than she knows… The Oracle Bones foretold that she and Gryff, a wildcat that has always been by her side, are the only ones who can fight back against the Dreamsnatcher's dark magic. Suddenly everything is at stake, and Moll is drawn into a world full of secrets, magic and adventure.
Perfect for fans of J.K. Rowling, Michelle Harrison and Eva Ibbotson.
Reviewed by K. M. Lockwood
This is a great story for children who like outdoor adventure, scary magic and resourceful heroines. You can’t help liking the exuberant yet believable Moll - and who wouldn’t want a wildcat as a companion? There’s lots of action and threat, right from the menacing prologue and it rarely lets up until the end – of this first adventure.
The natural world that Moll and the Elders inhabit is very much a part of the story. I rather hope it will encourage more children to enjoy woodlands because of the love shown in the writing. Likewise, the respect with which Abi Elphinstone portrays aspects of Romany culture gives extra depth to the story. You can find out more on her website.
There’s a strong sense of community as well as the courage of the main character. This helps the more sensitive reader cope with the more terrifying episodes – Skull is a truly ghastly character and it’s good to know Moll is not on her own.
I’d recommend watching the trailer to get a feel of the book – I think the cover looks a little young for some aspects of the story.
Those who love following Moll and Gryff’s escapades will be delighted to know there will be more in time.
at February 25, 2015