The Watching Wood by Erika McGann 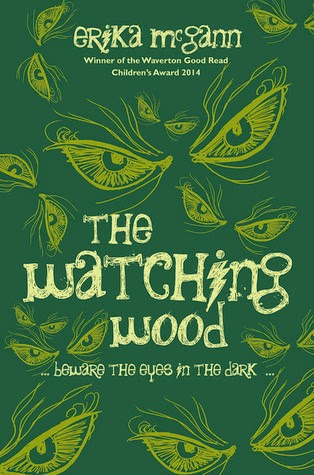 Grace Brennan’s feet pedalled furiously in the air below her. She was exhausted. Sweat dampened her shirt, and all she could think about were those women who sat on exercise bikes in the window of her local gym, spinning like their lives depended on it.
‘Don’t slow down, Grace, you’re nearly there!’ Ms Lennon’s voice sounded from the ground beneath.
The effort of staying airborne in one spot was starting to wrench at Grace’s gut and her legs were ready to give in, when a sudden spark singed her ankle and a sweeping blue flame surged from the heel of each foot to the toe.
‘Agh! My feet are on fire!’
‘Excellent, that’s perfect!’ Ms Lemon yelled. ‘Now, run!’
Published by The O’Brien Press, Dublin
262 pages in paperback
Cover & illustrations by Emma Byrne
Summary from Publisher’s Website:
Danger wherever you turn …
When Grace and her five best friends are sucked into a world of witches and faeries, it seems like a nightmare. Forced to take part in the Witch Trials, they risk life and limb to compete against other trainee witches in magical, death-defying stunts. But when they are discovered to be mere humans, this supernatural world turns against them, and the real nightmare begins.
Caught in the middle of an ancient and bloody feud, Grace must outwit powerful witches, avoid the clutches of menacing faeries, and bring her friends back together.
But have the girls enough power between them to make it back home?
******
Reviewed by K. M. Lockwood
Look at that cover, with the intimidating eyes watching you – and the green for leaves and for Ireland. Just right!
The story is downright creepy at times, and draws on Irish legends despite its contemporary start. It’s ideal for those who don’t want their tales in identical Disneyesque settings. Really good to read something so specifically local – and yet chockfull of dilemmas and dramas that any young reader from Detroit to Delhi can enjoy reading.
Back to those eyes - supernatural elements and peril give momentum to the story which might frighten a very sensitive reader. The publishers suggest 10 + but the strong friendships between our witchy heroines prevent it from being too alarming. There are enjoyable thrills and tension – but no really distressing horrors.
The likeable and distinctive friends, which readers may know from their previous adventures in The Demon Notebook and The Broken Spell, are each tested on their weaknesses. You don’t need to have read the prequels (I haven’t) but I expect it would deepen your enjoyment. This tale rapidly moves out of the witchcraft school setting but the sense of camaraderie remains. A touch of Hogwarts – but with half a dozen girls in the foreground.


In short; quirky, spooky fun with friendship as its key.  More books from Irish writers please!