Losing It by Helen Lederer 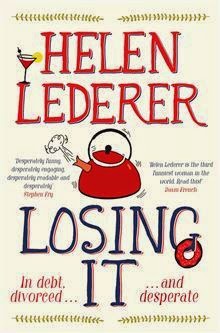 Monday 3 March
Millie Tucker allowed herself a brisk check for glitches as she paused in front of the small hall mirror. Escaped nasal hair would, after all, be an avoidable own goal. The eyebrows could do with a tint, which was depressing. She smiled. This was a new habit. And would need practice.

Published by Pan Books in February 2015
Pages - 458
Goodreads summary
Millie was at one time quite well known for various TV and radio appearances. However, she now has no money, a best friend with a better sex life than her, a daughter in Papua New Guinea and too much weight in places she really doesn't want it.

When she's asked to be the front woman for a new diet pill, she naively believes that all her troubles will be solved. She will have money, the weight will be gone, and maybe she'll get more sex.

If only life was really that easy. It doesn't take her long to realize it's going to take more than a diet pill to solve her never-ending woes...
*****
Reviewed by Sophie Duffy

Lederer writes like she speaks and her writing is, of course, very funny. Millie, the main character whose head and thoughts we inhabit, is self-obsessed, bubbling with anger and simmering with frustration. Millie is on a quest for thinness firmly believing it will solve all her problems but she faces a constant struggle with hunger, of all kinds. This is a story of self-obsession and self-hatred, turned on its head by the love of family and friends and an acceptance of who we are and how we look.

I feel this novel would have benefited from some heavier editing, particularly in the earlier stages. The stream-of-consciousness was hard to penetrate at first and it was difficult to fully engage with Millie, but she did grow on me as the story progressed and I began to feel more empathy towards her. The novel would lend itself to the stage or television as there are so many excellent scenes and lots of quick-fire dialogue. And it’s funny. Such a lovely change to read a comic novel. There are not nearly enough of these published and I am immensely thankful to Lederer for achieving this.

There are some brilliantly witty lines – the funniest are usually the throw-away thoughts of Millie. It is a very well-observed comedy of manners with a quirky collection of odd neighbours and colleagues, Feng Shui, personal trainers, yummy mummies, gin and a quasi-terrorist organisation known as VPL. Bridget Jones for the older woman. After all, fifty (and in fact sixty plus) is the new thirty, right?