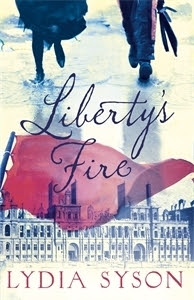 Dust thou art and unto dust thou shalt return, thought Marie. Sackcloth and ashes. Repentance time. But it was too late now for repentance.
Published by Hot Key Books in May 2015
Publisher’s summary:
Paris, 1871. A new revolution.
Life since the war has been tough, but Zéphyrine finds inspiration in the hope offered by the city’s radical new leadership. And she has fallen in love.
Dashing young violinist Anatole opens Zéphyrine’s eyes to another world. He in turn is swept away by her passionate beliefs.
But not all their friends are convinced. With the enemy at the gate and the barricades rising, can love and friendship survive?
****
Reviewed by Isabella Samuels
Lydia Syson has explored new territory for YA, in Liberty’s Fire; class divided love in late nineteenth century Paris amidst France’s third attempt for a republic. It is a fabulous adventure through love, loss and revolution.
Zéphyrine is a fantastically passionate character, having lead such a treacherous existence in the starved squalor of Montmartre she is caught up in the changes brought by new freedom. Anatole, an ambitious violinist, rescues her from the edge of disgrace and becomes enthralled by her passion. However, Jules, the mysterious, brooding, American photographer, and Marie, a beautiful and shrewd opera singer, are hesitant when introduced to this pretty, gutter girl. Rose, Zéphyrine’s militant, childhood friend, is similarly suspicious of Zéphyrine’s choice, who seems too inherently bourgeois to be sincere.  But Syson keeps the reader’s belief in their mutual sincerity and passion throughout, though she keeps us constantly unsure as to whether it is possible for them to find a ‘happily ever after’.
The love story often takes the passenger seat though (no bad thing) and the gritty, fearful political climate takes charge. The past revolutions and the Terror of a hundred years earlier loom over the characters, providing consistent tension and doubt in the Commune’s success. However I did find myself having to go back and re-read to really make clear certain events and who was on whose side. Syson can get slightly lost in the political intricacies that are not spelled out clearly for simpletons such as myself. This is a manageable issue though and doesn’t get in the way of a great story.
Syson uses multiple narrative perspectives to let us into the heads of the four main characters. Each are given their own distinctive voice, creating a rich atmosphere building the momentum to the dramatic climax. The characters are all fascinating microcosms of different areas of Parisian society, allowing Syson to paint a vivid picture for avid historical fiction fans. Each character has their own dark secrets waiting to be unearthed, their own motivations for the triumph or failure of the Commune that drive their downfalls and actions and with the plot being littered with twists and turns, surprises and shocks the novel makes for some seriously exciting reading.
With those inevitably rainy, British summer days ahead, Liberty’s Fire is the perfect book to escape into.