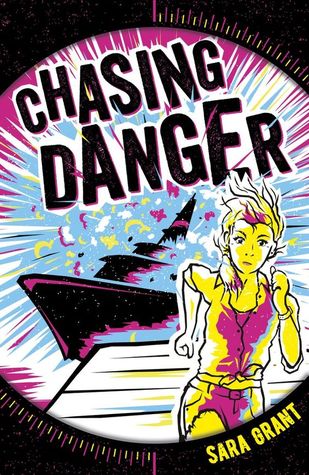 "Don't leave me here!" I shouted and waved wildly at the seaplane as it floated away with a roar and spray of salty water.
I was standing on a twelve-by-twelve floating dock in the middle of the Indian Ocean.

Summary
Fourteen year old Mackenzie is pretty sure that visiting her grandmother is going be the most boring holiday ever, even if they are going to a tropical island. But what Mackenzie doesn't know is that the island is about to come under attack. Soon Mackenzie will trying to save herself, her grandmother and the entire island in the most exciting (and most dangerous!) holiday of her life.
****
I think I might need a holiday after reading this book. There is so much explosive action in it, I'm exhausted. Chase barely has time to snorkel through the coral reef before the modern day pirates attack the beach. Thanks to the super training by her Dad, Chase is ready to deal with what happens next. Alongside Mackenzie's extensive computer knowledge, they pull off some Charlie's Angels style action. Every chapter, you think Chase and Mackenzie are going to be OK and then Wham! It goes horribly wrong. These two have serious girl power and I loved them both. Who needs boys when girls can rock all by themselves?

Sara Grant's comical timing is spot on. The first few chapters had me crying with laughter before I realised something dangerous was about to happen. You can tell the Sara Grant really enjoyed writing this novel.

The island is to die for. I'm thinking the author had first hand experience of it, because the details had me desperate to grab my suitcase and passport.

Sara Grant has shown how easily she can jump from YA to MG to Early Chapter Books. She makes it look as easy as flicking your hair! I look forward to reading more about Chase's kick ass adventures in the near future. I might need to get some warmer clothes though because I've a feeling we are heading for colder climates in the next book.