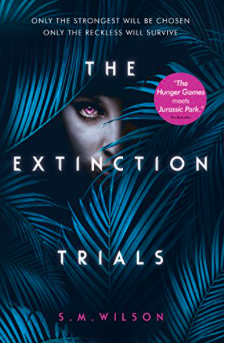 There's nothing better than being so engrossed in a book that you never want it end and discovering that there are another two books to follow in the series. OK, so I'm a bit late to the party when it comes to The Extinction Trials, but as the old cliche says, better late than never! And just in time for the rest of the series.
I intend to read and review all the ABA shortlisted books ready for the event in June. At the moment, this one is a definite front runner for the Gold Award.
The best way to describe The Extinction Trials is just as it says on the book cover - 'The Hunger Games meets Jurassic Park' - that line says everything you need to know. Such a clever and well thought out match. I wish I'd thought of it. I've read a lot of dystopian over the years since falling in love with The Hunger Games and nothing has really quenched my thirst for more, until this book.
The world that Stormchaser and Lincoln live in is running out of everything they need to survive. Across an ocean, is a land of plenty, all the things they so desperately need, such as food, space and medicinal plants. The only tiny problem is that it is inhabited by dinosaurs - big, nasty dinosaurs who can people as a snack. So the important people who run EarthAsia (the Stipulators), come up with a plan to send one hundred people to Piloria, where the dinosaurs live, and bring back different dinosaur eggs, which they can use to extract DNA from. With that DNA, they can create a virus that will make the dinosaurs become extinct and give them a new land to live on.
The story is told from a  dual perspective and both characters have very different story arcs. Stormchaser is dubious, she has a lot of compassion for dinosaurs, but likes the idea of more food to eat, so she competes in the trials to become one of the chosen. Lincoln is desperate for medicine for his dying sister, so he competes too. So this is where is it very similar to The Hunger Games. They are competing for a place on the boat and a one competitor in particular doesn't care who he hurts to make sure he gets a place. The trials are extremely difficult and everyone is watching out for themselves.  Once the trials are completed, they head to the island, where the dinosaurs live - that's where your Jurassic Park connection comes into play.
So the book follows similar patterns to these stories, but it is actually so much more than that. I was literally glued to this book. The tension and pace leave you breathless. Stormchaser and Lincoln may be really strong characters, but even they are full of fear when confronted with a seriously angry T-Rex. However there are moments of stillness in the book, allowing an excellent balance between the more  tense scenes. The characters are believable. OK, Stormchaser is a little unsure of what she really wants but isn't that a normal human reaction? Lincoln on the other hand, never wavers from his quest to help his sister. I have a couple of favourite minor characters, Milo, the plesiosaur, is just adorable. I can't believe I'm saying this, but I'd love a dinosaur like him. He's as loving as Manchee in The Knife of Never Letting Go, but without the horrible end. Or at least I hope he doesn't get killed off in the following books!!!! I also really liked Blaine, but I won't say anymore about him, as I don't want to give any spoilers.
This book has 'major motion picture' screaming out of it. If this isn't snapped up, I will be shocked. Wilson's style of writing is visual on an epic scale and fast paced just like all the good action films you have seen in the past.
And look! 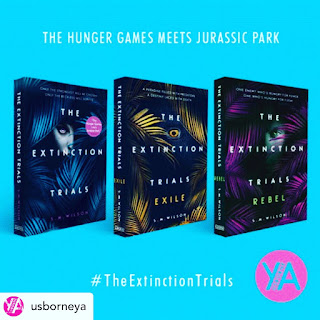 When you finish reading the first book, Usborne and S.M. Wilson have kindly brought out two more in the series for you to lose yourself in!!
If you love dystopian, you will love this.