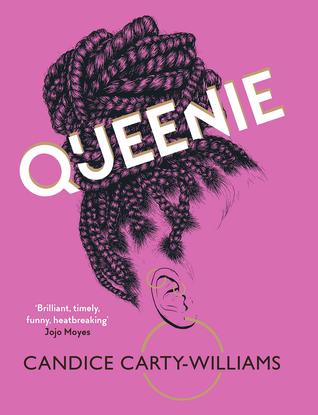 What a heartbreaking delight this was to read! It isn't the usual type of book I would pick up, but firstly I was drawn to the cover, followed by the media coverage on Twitter. If anyone ever says social media doesn't sell books, they are talking out of the backsides.

Queenie comes across as a bit of a train wreck. She has extreme difficulty with relationships all round. At times I found myself wanting to shake Queenie and tell her to pull herself together as to begin with I was convinced it was probably all Queenie's fault, but as the story unravels I was shocked at the abuse she suffered early on in her life. Her childhood affected her adult behaviour more than she realised and it's only on the break up of the relationship she felt would end in marriage, that everything begins to unravel.

If you are looking for a happy ending, I'm not quite sure this book gives it, but what it does provide is a stronger, more resilient and self assured Queenie. She starts to take control of her life, making sure no one treats her like a door mat again. I loved Queenie, even if no one around her really did. She is real and her actions are simple reactions to the tornado that encompasses her life at that moment.
Her grandparents and aunt are hilarious. The monitoring of the hot water, the best room for guests and the constant need for cleaning, reminded me of my childhood. They are from a different generation and can't get their heads around the way society lives now.

This book has so many hilarious moments in it, which makes you feel guilty for laughing, because of how broken Queenie becomes. You feel like you are laughing mercilessly at a homeless person. No one seems to mention the darker side of this book and if I wasn't completely committed to it by that point, I might not have picked the book up. This book is in no way Bridget Jones! More like Eleanor Olephant Is Completely Fine - a tragic-comedy of sorts.

This book isn't lighthearted at all, as it deals with some heavy issues. Black Lives Matter is prominent throughout the book and if black girls are treated in the same way that Queenie is, I am stunned by the mindsets of a percentage of the white male UK population. To say I had no idea, would be an understatement. No wonder Queenie has self loathing instead of self love to begin with. Mental health plays a huge role in this book too and it shows how easily someone can succumb to panic attacks and self loathing. It also shows that it isn't a quick fix situation. Mental health takes a slow winding road, with many traffic jams and wrong directions before you reach your destination.

The book gives a very realistic view of dating apps and it has only confirmed my suspicions that it is mainly full of married men looking for a forbidden quickie or ones with fetishes. Queenie is treated like a sexual conquest to be knocked off someone's list. Just so they can brag in a bar, that they have slept with a fuller figured black person.

What do I take from this book? That even though life can sometimes be miserable and difficult, they are just moments in time. We rebuild our lives brick by brick, only each time the wall falls, we use stronger cement to put it back together with. Love the people that support you and let the haters hate.

Even though on the outside, people may appear to be happy and loving life, they are much more complex than that. It's what's going on on the inside that matters.