The Thunder Girls by Melanie Blake 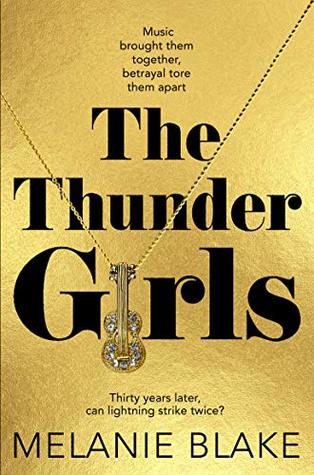 This book had so much potential, which is sad, because unfortunately it fails to deliver. I would say on this occasion, don't believe the hype. I'm not normally one for giving bad reviews,  because I know how much time and effort goes into bringing this book to life, so I will try and be constructive as possible. For me, it felt like it needed another edit.
I loved the idea behind this book. I could envisage the Spice Girls in this kind of situation. Four girls who were originally a group when they were young, come back together in their late forties to early fifties to perform again. This plot line had me hooked. I wanted to see them triumph and show the world that girl power really is strong.
The conflict between the band members seemed very realistic. I would definitely be as miffed as Roxanne to be working with someone who literally ruined my life. The glamorous celebrity lifestyle was brought together so well too. I felt like I was mixing with pop royalty.
However there were some plot issues that really bugged me. So please stop reading now, if you haven't read it and plan to as there will be spoiler alerts.
*Spoiler Alerts*
The character, Jack. I just didn't get him. His change of character literally came from nowhere and I didn't feel as though we had been prepared for it. I also didn't feel that if his motive against Chrissie was that strong, why on earth did he spend the majority of his career, helping to build her profile and make her millions? It didn't ring true. And this was where I found myself losing interest.
I felt this book was missing the implementation of Chekov's gun. Certain elements that should have been set up in the beginning of the story were missing, making situations feel unrealistic by the end. Elements of each character's story seemed to be missing.
There were too many characters, with quite a few adding no purpose to the story. Personally I would have got rid of Pete and Dave, as they didn't add anything to the story.
I felt the ending was rushed. The big climatic scene could have been bigger and I would have loved to see more of the aftermath, instead of moving on so quickly.
This book has been described as a Jackie Collins / Jilly Cooper novel of today. To a certain extent I can see why it has been referenced, but it is lacking the pace and the sexual tension of either of these writers. And believe me, I read a lot of their books growing up!
I honestly feel that this book could have been mega, with a stronger plot and another thorough edit. However, this is just my opinion and I would recommend others trying it for themselves.