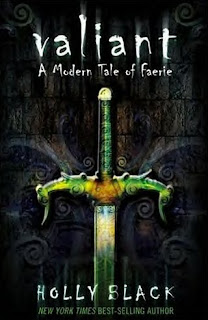 Published by Simon and Schuster in 2005

I just love reading these faerie books by Holly Black. She really takes the faerie away from the pleasant fairy tales we all grew up in and puts them in some very dark and dangerous places.

Valiant is not a followup of Tithe, instead it is a story that perhaps is happening at the sidelines.

The story starts with a real Jerry Springer style opening, where Val comes home to find her boyfriend doing the deed with her mother. I had images of them all on Jerry Springer's show fighting and arguing about what happened. Val's way of dealing with the situation is to just disappear. She gets on the subway, shaves all her hair off and heads for the back streets of New York. She ends up in the hobo areas and falls into company with a rather strange trio. Lolli who is definitely a love them and leave them type of girl, Dave, desperate to be the one who Lolli loves and Luis, who can see things that no one else can. Val ends up living with them in a disused subway station, where she soon discovers that faeries really do exist.

Val is determined to meet the troll Ravus, whom Luis works for and with the help of Lolli, she breaks into his home. He discovers her trying to steal from him and makes her pay by turning her into one of his slaves. However when Ravus becomes accused of killing faeries, Val comes to his rescue and saves his life. In return he offers to teach her how to use a sword, so that she can defend herself. A strange relationship develops between Ravus, the green long toothed troll and Val, permanently high on Never ( faerie juice that allows her to use glamour). Their friendship and budding relationship is pushed to the edge, when the real faerie killer is discovered.

This book is very very dark and I absolutely loved it. It was fast paced from the beginning and you are desperate for Val to find her true self. The life they lead on the streets sounds appalling and you just want to offer all of them a good bath and a meal.

Val is a very strong character, after witnessing her mother's betrayal, she learns to take care of herself as well as her new found friends. Ravus reminds me a little of the Beast in Beauty and the Beast and I really couldn't see how anyone would be attracted to a green long fingered, long toothed troll, but I suppose it takes all sorts. Val goes to such great lengths to save her friends life and nearly loses her own in the process.

Holly Black is a fabulous writer who takes faeries into a very disturbing place. I would definitely recommend this book, as well as Tithe, which I reviewed some months back.

Have you read any of this series of books by Holly Black?

Just a quick note about the Melinda Marr trilogy of books that I bought for £7.99 this week - a few of you asked about them and I thought I should let you know where I bought them. Unfortunately I think they may be only available in the UK from here, but I got them from Red House and you can access them here. I often buy teenage and children's books from Red House as they are always so much cheaper.

Email ThisBlogThis!Share to TwitterShare to FacebookShare to Pinterest
Labels: Book reviews, faeries, holly black, once upon a time, young adult