7) The Gourmet by Muriel Barberry 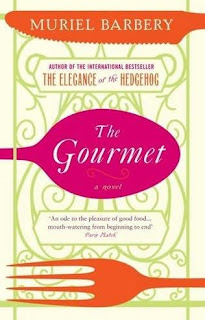 'When I took possession of the table, it was as supreme monarch. We were kings, the suns of those few hours of banqueting, who would determine their futures and describe their horizons - tragically limited or mouth-wateringly distant and radiant - as chefs. I would stride into the room the way a consul entered the arena, and I would give the order for the feast to begin.'

Pierre Arthens is France's greatest food critic and he is on is deathbed. He cannot die until he stops being tormented by his inability to remember the most delicious thing he has ever eaten throughout his lifetime. He spends his last hours looking back over his life, to try and discover when he ate that elusive meal. In between each chapter about food, the people that have surrounded Pierre through out his life, share their thoughts and feeling on his life and his inability to love his family in the same way he loves food.

This book should definitely come with a public health warning. It should not be read by anyone about to begin a diet or in the midst of a diet, as it will seriously damage your willpower.

I began this book, during the second week of my perpetual diet and could not devour a chapter without a glass of white wine and a chocolate truffle. With each paragraph I read, my mouth began salivating; with each vivid description of different meals, my mouth went into overdrive, easily imagining each meal described. Every thing is described with such detail, the words just flow off the pages. This book tantalizes all of your senses, from touch through to taste. It will remind you of times gone by, when you first ate certain types of food and who you were with at at the time. If I could have put this book between two slices of bread, with a little butter and eaten it, I would have. It was simply divine.

'In bread one can find dazzling variety, akin to a miniature world, which reveals its inner workings as it is consumed. You storm it through an initial encounter withe the barrier of crust, then yield to wonder the moment you are through, as the fresh soft interior contents.There is such divide between the crunchy shell - on occasion as hard as stone, at other times mere show, quickly yielding to the charge - and the tenderness of the inner substance, which lodges in one's cheeks with a docile charm, that one is almost at a loss'.

This book was absolutely amazing and draws you in from the first page. You cannot help but feel pity for Pierre, that he never found it in his heart to love his family as passionately as he loved food. He knew more about food than he did his own children. Even to the end, he never rectifies the broken relationships, yet they all feel such love for him, even though he never showed it back. I got the impression that he never really cared what others thought of him, they were insignificant to his life, where as to them, his tendency for coldness, left them with a gaping hole in their hearts.

This book is a very quick read and can easily be digested in one sitting. If you are a lover of food, then you really must read this one. This will make you nostalgic for the most fabulous meals of your lifetime.

I wonder if you can remember the most beautiful thing you have ever eaten in your life. The one food and memory that will stay with you forever. The one item of food that can still make your mouth water years after eating it. The one where you can imagine it instantly and almost taste it.

The most wonderful food I vividly remember eating and never having since, was Angels on Horseback, in a restaurant in Hampstead Heath. I was about 20 years old, earning good money as a waitress,whilst studying for my degree and thinking I was pretty sophisticated. I went to a restaurant with some friends and ordered this starter off the menu and fell in love. Angels in Horseback are oysters wrapped in bacon and to this day I have never attempted to cook them just in case they don't taste the same.

So that is my most wonderful food memory, a meal I still crave nearly twenty years later. What meal do you remember purely for the taste?