I disappeared again this week and I apologise. I wasn't feeling well through Thursday and Friday and I abandoned my blog for some down time. I slept from 7.30pm right through to 6.30pm the following morning and realised I definitely needed it. I find this time of year so busy and Friday was the first day all week where I was actually at home during the day. I am looking forward to the children breaking up from school, so that we can start to slow down and enjoy the summer. We have booked our next camping trip too, so I am very excited.

I had a little splurge in the charity shops this week and came back with a bundle of books. I haven't done this in a while, so it was really nice to browse and pick up some goodies. 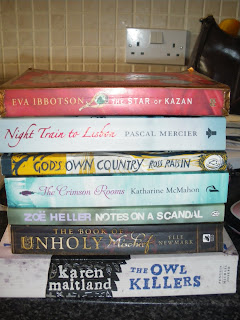 1) The Star of Kazan by Eva Ibbotson - I haven't read any of her books yet, but I have heard such good things about them. This one is about a young servant girl living in a grand house in Vienna. Her life would be perfect but for the mystery of her real mother. She was found in a church, and no one knows where she came from.

2) Night Train to Lisbon by Pascal Mercier. This has been compared to The Shadow in The Wind, as it deals with a mysterious old book.

3) God's Own Country by Ross Raisin ( the Sunday Times Young Writer of the Year 2009 and shortlisted for the Guardian First Book Award 2008). Sam Marsdyke spends his days alone on the moors tending sheep, watching wide eyed ramblers and townies move into the area,creating second homes. Then a new family move into the area and Sam is quite taken with their daughter. This is a described as a comedy set in the Yorkshire landscape and I can't wait to read it.

4)The Crimson Rooms by Katherine McMahon. I loved The Rose of Sebastopol, so I seem to be always picking up books by McMahon to read at a later date. This one is set in London in 192 and deals with the aftermath of the war. McMahon seems to have strong female characters in her books, and this one appears not to be an exception.

5) Notes of a Scandal by Zoe Heller. I was over the moon to get hold of this one, as I have heard such good things about it. When Sheila joins the staff at St George's school, the history teacher Barbara is convinced she has found a kindred spirit. When Sheila is discovered to have had an affair with one of her young pupils, Barbara becomes her chief defender, but friends can hurt you more than lovers.

6) The Book of Unholy Mischief by Elle Newmark. For centuries the people of Venice have been seeking an extraordinary book, rumoured to contain the key of immeasurable power. Now in the year 1498, mischievous street orphan Luciano stumbles across a secret that others will kill for.

7) The Owl Killers by Karen Maitland, author of Company of Liars. I just love the covers of both of these books. This book is set in England 1321 during the Dark Ages. Full of accusations of witchcraft, just my kind of book. 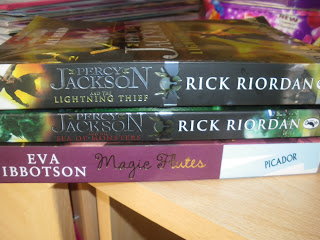 The children's school had a summer fayre on Friday evening and for the first time ever, they had a book stall. I headed straight for it first and picked up three books, then I hit the wine stall and won a bottle of red. That was me sorted for the evening!

As you can see, I picked up the first two books in the Percy Jackson series, where Percy is related to the Greek gods.

I also picked up another Eva Ibbotson one called Magic Flutes, which is set in the spring of 1922, following the life of Tessa, a princess, who has given up her duties to follow the heart, working backstage at the Viennese opera.

I am getting to the stage, where my book shelves are now bursting at the seams. Hubby has promised me two mores bookcases and I shall be chasing him for them now.