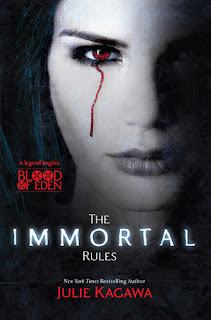 They hung the Unregistered in the old warehouse district; it was a public execution, so everyone went to see.
I stood at the back, a nameless face in the crowd, too close to the gallows for comfort but unable to look away.


In a future world, Vampires reign. Humans are blood cattle. And one girl will search for the key to save humanity.


Allison Sekemoto survives in the Fringe, the outermost circle of a vampire city. By day, she and her crew scavenge for food. By night, any one of them could be eaten.


Some days, all that drives Allie is her hatred of them. The vampires who keep humans as blood cattle. Until the night Allie herself is attacked—and given the ultimate choice. Die… or become one of the monsters.
Faced with her own mortality, Allie becomes what she despises most. To survive, she must learn the rules of being immortal, including the most important: go long enough without human blood, and you will go mad.
Then Allie is forced to flee into the unknown, outside her city walls. There she joins a ragged band of humans who are seeking a legend—a possible cure to the disease that killed off most of humankind and created the rabids, the mindless creatures who threaten humans and vampires alike.
But it isn't easy to pass for human. Especially not around Zeke, who might see past the monster inside her. And Allie soon must decide what—and who—is worth dying for.

**********
I have seen a few posts comparing this to Julie Kagawa's first series, The Iron King. I haven't actually read it, so I can't comment. I felt like I was going into it blind, a whole new world about to open up for me.
From the first sentence you are thrust into a really atmospheric scene and you wonder what you have let yourself in for.  The tension building was amazing. For the first couple of chapters, as each ended with a powerful hook, I was so caught up in the drama, I held my breath. One day one of these books is going to cause me severe asphyxiation!
A really powerful start to the book that made me rethink my whole opinion of vampires. I was a little dubious to read this to begin with, I mean vampires have been written to death, but Julie Kagawa surprised me with her version of them. If you are looking for the Twilight style human huggers, head straight for the exit, because you are likely to lose a bucket full of blood if you even look at these vampires the wrong way. These vampires are nasty and just love to play cat and mouse! Put them alongside the rabids and you are doomed! I really loved the author's take on vampires, definitely old school.
I loved Alison! She was one hell of a girl. There is no room for naivety in her life, she thinks on her feet and makes sure she survives. I wasn't surprised at all at her decision to become a vampire. She is very strong willed and sensible. She knew exactly what her decision would mean, she wasn't about to blame anyone else, she took full responsibility. Zeke was a just a beautiful soul; the type of guy you always want covering your back.  Katin was a brilliant character too, he was like a cross between Yoda from Star Wars and Brad Pitt in Fight Club. The following quote has to be my favourite in all the book.
'Sometime in you life, Alison Sekemoto, you will kill a human being. Accidentally or as a conscious deliberate act. It is unavoidable. The question is not if it will happen, but when. Do you understand?'
Just brilliant! Fight Club all over again!
I really enjoyed the way the author showed the contrast between Alison's life before and after becoming a vampire.  It gave such a clear indication of her true character.
I did find the book dragged a little in the middle; I found myself wanting to speed the action up a quite a bit. However the ending definitely made up for it. I have to admit that I never imagined that the ending would occur in that way when I began reading the book.
I can't wait to read the next book in the series. It really made a refreshing change to see a female vampire as the lead character! Ten brownie points awarded to Julie Kagawa!
*************
If you would like to win a copy of The Immortal Rules, then please enter your details in the Rafflecopter below. The competition is international and will close on the 5th of May.