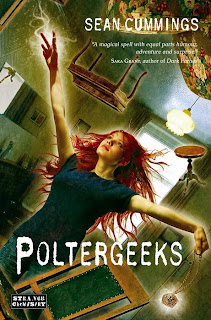 Published by Strange Chemistry in October
Pages - 288
Mrs Gilbert literally flew out the front door of her house. I should add that Marcus Guffman and I had absolutely nothing to do with it because frankly, I've had it with the whole irresponsible teenager thing. It's bad enough when people over forty look at you like you're planning on axe murdering their entire family just because you and your best friend since grade school are going door to door raising money for the Crescent Ridge Hig School Read-A-Thon.
Goodreads Summary
15-year-old Julie Richardson is about to learn that being the daughter of a witch isn't all it's cracked up to be. When she and her best friend, Marcus, witness an elderly lady jettisoned out the front door of her home, it's pretty obvious to Julie there's a supernatural connection.

In fact, there's a whisper of menace behind increasing levels of poltergeist activity all over town. After a large-scale paranormal assault on Julie's high school, her mother falls victim to the spell Endless Night. Now it's a race against time to find out who is responsible or Julie won't just lose her mother's soul, she'll lose her mother's life.
*********
As soon as I heard about this book I was desperate to read it.  From the first sentence I felt like I was on a thrilling ride which continued at a fast pace all the way through the book.
I adored the humour  in the book. Sean Cummings has one sarcastic mind and I personally love it!
The characters really stand out, they all have a quirkiness about them.  Julie, the main protagonist, is just full of sassiness and sarcasm. Straight away, you are cheering her on, desperate for her to solve the disasters erupting around her.  Poor Julie, just never stops! The action is wham, bam all the way through the book, never giving her a chance to catch her breath, let alone worry about what she was letting herself in for. That is probably the  only thing I would change about the book; the pacing.  At times I would have liked it  to be a bit slower. I really wanted Julie to slow down, but I felt she never got the chance.
And then there is Marcus! I personally don't relate to the geeks in YA books, but this one is a real sweetie. His heart is definitely in the right place and he is just such a strong character for Julie to lean on.
The Tutelary was hilarious in his or her many disguises. His later appearance in the book really had me in stitches.
The plot is very well written and kept me intrigued. I always get a little excited when Matthew Hopkins makes an appearance in a book. What witch book would be complete without him?
There are lots of red herrings with the story, so I didn't see the ending coming until very near the end. I thought the author had an original  and unique voice, one that I felt stood out from the crowd.  The book was a dramatic page turning rollercoaster that slipped in snippets of humour.
I really enjoyed it and I can't wait to see what else Sean Cummings writes.
at August 21, 2012