Most Anticipated Reads By Debut Authors for 2013 (First Six Months)

As the year draws to a close again, I thought it was time to look at the books I am looking forward to reading next year. Last year you will remember I broke the books down into the following three categories.
*Most Anticipated Reads by Debut Authors
*Most Anticipated Reads in a Series
*Most Anticipated Reads by Established Authors I Love.
I will be keeping to the same format again this year and today I 'm beginning with the most anticipated reads by debut authors. Now I will be honest and admit to reading at least one of them already but I felt that they should be included in the list too. This list in is no particular order, so no one is sitting at the number one spot. I just want to read them all!!
With the debuts I have been ruthless and picked just one book  from each publisher, so believe  me there are some other fantastic ones coming out too but you would have been reading my post for a month if I had listed them all. I have also chosen only books that will  be out in the first six  months of the year. Dance of Shadows by Yelena Black
Published by Bloomsbury in February.
The cover alone is to die for. This book is about ballet dancing with lots of love interest as the main character attracts three different men.
Dancing with someone is an act of trust. Elegant and intimate; you're close enough to kiss, close enough to feel your partner's heartbeat. But for Vanessa, dance is deadly – and she must be very careful who she trusts . . .
Vanessa Adler attends an elite ballet school – the same one her older sister, Margaret, attended before she disappeared. Vanessa feels she can never live up to her sister's shining reputation. But Vanessa, with her glorious red hair and fair skin, has a kind of power when she dances – she loses herself in the music, breathes different air, and the world around her turns to flames . . .


Soon she attracts the attention of three men: gorgeous Zep, mysterious Josh, and the great, enigmatic choreographer Josef Zhalkovsky. When Josef asks Vanessa to dance the lead in the Firebird, she has little idea of the danger that lies ahead – and the burning forces about to be unleashed . . . 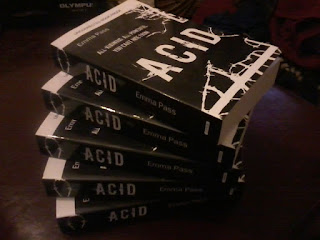 Acid by Emma Pass
Published by Corgi in April 2013
This book is won't actually be published until April so the cover isn't finalised, but I am pretty sure Emma won't mind me using this picture from her blog showing the ARC copy covers. This is an exciting new dystopian novel that will have you questioning the very existence of Katniss Evergreen!
A fast and furious thriller featuring the coolest, toughest bad girl since Lisbeth Salander. Meet Jenna Strong.
In Jenna’s world, ACID – the most brutal, controlling police force in history – rule with an iron fist. And it was ACID agents who locked Jenna away for life, for a bloody crime she struggles to remember.


But Jenna’s violent prison has taught her a thing or two about survival. And when a mysterious rebel group breaks her out, she must use her strength, speed and skill to stay one step ahead.
A gripping futuristic debut that will hook you from the very first page. Shadows by Paula Weston
Published by Orion Children's Books in January 2013
Twitter has got me way over excited by this book! I really need to  read it and soon. It is an angel thriller and I don't think I've read many angel books of late.
It's been almost a year since Gaby Winters was in the car crash that killed her twin brother, Jude. Her body has healed in the sunshine of Pandanus Beach, but her grief is raw and constant.
It doesn't help that every night in her dreams she kills demons and other hell-spawn. And then Rafa comes to town. Not only does he look exactly like the guy who's been appearing in Gaby's dreams, he claims a history with her brother that makes no sense.


Gaby is forced to accept that what she thought she knew about herself and her life is only a shadow of the truth - and that the truth is more likely to be found in the shadows of her nightmares.
Who is Rafa? Who are the Rephaim? And most importantly - who can she trust? Infinite Sky by CJ Flood
Published by Simon and Schuster in February 2013
I have heard a lot about this book and I know it will make me cry, but I still can't wait to read it.
Iris Dancy’s free-spirited mum has left for Tunisia, her dad’s rarely sober and her brother’s determined to fight anyone with a pair of fists.
When a family of travellers move into the overgrown paddock overnight, her dad looks set to finally lose it. Gypsies are parasites he says, but Iris is intrigued. As her dad plans to evict the travelling family, Iris makes friends with their teenage son. Trick Deran is a bare knuckle boxer who says he’s done with fighting, but is he telling the truth?

When tools go missing from the shed, the travellers are the first suspects. Iris’s brother, Sam, warns her to stay away from Trick; he’s dangerous, but Iris can no longer blindly follow her brother’s advice. He’s got secrets of his own, and she’s not sure he can be trusted himself. 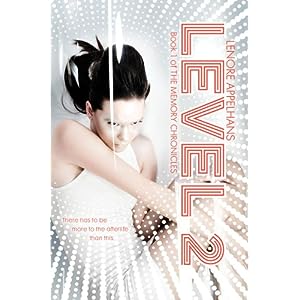 Level 2 by Lenore Appelhans.
Published by Piccadilly Press in Jan 2013
I am fascinated by this book and by the author, as I know Lenore used to be a book blogger a while back.
Since her untimely death the day before her eighteenth birthday, Felicia Ward has been trapped in Level 2, a stark white afterlife located between our world and the next. Along with her fellow drones, Felicia passes the endless hours reliving memories of her time on Earth and mourning what she’s lost—family, friends, and Neil, the boy she loved.
Then a girl in a neighboring chamber is found dead, and nobody but Felicia recalls that she existed in the first place. When Julian—a dangerously charming guy Felicia knew in life—comes to offer Felicia a way out, Felicia learns the truth: If she joins the rebellion to overthrow the Morati, the angel guardians of Level 2, she can be with Neil again.
Suspended between Heaven and Earth, Felicia finds herself at the center of an age-old struggle between good and evil. As memories from her life come back to haunt her, and as the Morati hunt her down, Felicia will discover it’s not just her own redemption at stake… but the salvation of all mankind. Pantomime by Laura Lam
Published by Strange Chemistry in 2013
Now this is one I am cheating with as I have already read it, but I know you guys are going to love it! There are just so many layers to this story.
R. H. Ragona’s Circus of Magic is the greatest circus of Ellada. Nestled among the glowing blue Penglass—remnants of a mysterious civilisation long gone—are wonders beyond the wildest imagination. It’s a place where anything seems possible, where if you close your eyes you can believe that the magic and knowledge of the vanished Chimaera is still there. It’s a place where anyone can hide.
Iphigenia Laurus, or Gene, the daughter of a noble family, is uncomfortable in corsets and crinoline, and prefers climbing trees to debutante balls. Micah Grey, a runaway living on the streets, joins the circus as an aerialist’s apprentice and soon becomes the circus’s rising star.


But Gene and Micah have balancing acts of their own to perform, and a secret in their blood that could unlock the mysteries of Ellada. Ferryman by Claire McFall
Published by Templar in April 2013


I am so utterly intrigued by this book and I think you will be too. From what I have read, I think I have it sussed what it is about, but I am keeping quiet in case I get it totally wrong.
When Dylan emerges from the wreckage


of a train crash onto a bleak Scottish hillside, she enlists the help of a strange boy who seems to be waiting for her.  But Tristan is no ordinary teenage boy, and the journey across the desolate, wraith-infested wasteland is no ordinary journey. Red Ink  by Julie Mayhew.
Published  by Hot Key Books in June 2013
This sounds like a really gritty read set in Finchley, London.
When her mother is knocked down and killed by a London bus, fifteen-year-old Melon Fouraki is left with no family worth mentioning. Her mother, Maria, never did introduce Melon to a 'living, breathing' father. The indomitable Auntie Aphrodite, meanwhile, is hundreds of miles away on a farm in Crete, and is unlikely to be jumping on a plane and coming to East Finchley anytime soon. But at least Melon has 'The Story'. 'The Story' is the Fourakis family fairytale. A story is something. RED INK is a powerful coming-of-age tale about superstition, denial and family myth Splintered by A.G. Howard
Published by Amulet Books in January 2013
The cover alone is intriguing enough to make me want to read this book. The connections to characters from Alice In Wonderland draws me in more.
When her mother’s mental health takes a turn for the worse, Alyssa learns that what she thought was fiction is based in terrifying reality. The real Wonderland is a place far darker and more twisted than Lewis Carroll ever let on. There, Alyssa must pass a series of tests, including draining an ocean of Alice’s tears, waking the slumbering tea party, and subduing a vicious bandersnatch, to fix Alice’s mistakes and save her family. She must also decide whom to trust: Jeb, her gorgeous best friend and secret crush, or the sexy but suspicious Morpheus, her guide through Wonderland, who may have dark motives of his own. Amity and Sorrow by  Peggy Riley
Published under the new imprint from Headline, Tinder Press in March 2013.
I have heard such good things about this book already.
In the wake of a suspicious fire, Amaranth gathers her children and flees from the fundamentalist cult in which her children were born and raised. Now she is on the run with only her barely aged teenage daughters, Amity and Sorrow, neither of whom have seen the outside world, to help her. After four days of driving Amaranth crashes the car, leaving the family stranded at a gas station, hungry and terrified.


Rescue comes in the unlikely form of a downtrodden farmer, a man who offers sanctuary when the women need it most. However while Amity blossoms in this new world, free from her father's tyranny, Sorrow will do anything to get back home. Although Amaranth herself is beginning to understand the nature of the man she has left, she needs the answer to one question; what happened to the other wives and children.
at December 07, 2012