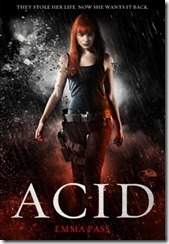 The first time I notice the new inmate is when we’re all lined up outside our cells for morning head count. He’s standing five doors down from, sneaking glances at the rest of us as the guards wave their wrist-scanners across our hips to read the spytags that are implanted when we first get here.
Published by Corgi Children’s Books on the 25th April
Pages 431
Goodreads Summary
2113. In Jenna Strong’s world, ACID – the most brutal, controlling police force in history – rule supreme. No throwaway comment or muttered dissent goes unnoticed – or unpunished. And it was ACID agents who locked Jenna away for life, for a bloody crime she struggles to remember.
The only female inmate in a violent high-security prison, Jenna has learned to survive by any means necessary. And when a mysterious rebel group breaks her out, she must use her strength, speed and skill to stay one step ahead of ACID – and to uncover the truth about what really happened on that dark night two years ago.
*******
I was lucky enough to get my hands on one of the most anticipated UK debuts of the year when I attended a blogger brunch at Random House. I feel like I have been waiting forever to get my hands on this book, so I was really pleased when I got the opportunity to read it early. I wasn’t disappointed.
Emma Pass has created an excellent dystopian perspective of the UK in 2113. Alongside Claire Merle, she has shown that UK authors can write excellent dystopian YA just like our favourite American writers. The world Emma has created has a strong feel of Orson Well’s 1984 to it and you get the sense that everyone is watched and all are brainwashed to believe the information told to them. The world is stifling and unbearable for the residents, so it isn’t any wonder that many are in the throes of a revolt. There are also elements of Total Recall and Bourne Identity to the story, that just give the plot an even meatier filling.
When you meet Jenna on the first page, you don’t feel sorry for her, because she has ‘tough little cookie’ branded and emblazoned into her mannerisms. She knows how to look after her self in a style similar to Lara Croft. Any man stupid enough to pick a fight with her will not make the same mistake twice, that’s saying he can even speak again when she has finished with him. As the book progresses, you realise their is so much more to Jenna than the first impressions you were given. There is a softer side to her that she had wrapped up  and hidden in order to protect it. With the help of others she has learnt how to look after herself purely for protection. In the blurb she is described as a real tough nut, and you wonder if she is devoid of feeling, but as you read the book you really feel for Jenna; she has been hurt, used and abused and she is just getting by. I felt the blurb might be misleading a little as I was expecting this book to be rather violent all the way through, and thankfully it isn’t as the book is a really gripping thriller as one girl searches for the truth.
I really enjoyed the budding relationship between Jenna and Max, especially while on the run. There were so many hidden secrets between them, you find yourself on pins waiting for the truth to come out. It was interesting to read Jenna’s thoughts on love as she tried to determine what she actually felt for Max, based on her sparse experience with boys.
I loved the newspaper snippets which really helped to bring the world dominated by ACID to life. Not only did they discuss Jenna Strong, but they also gave an insight into living under the ruthless dictatorship of ACID.
The plot twists and turns from the first page and you are sucked into the story instantly. The writing was furious at times and fast paced in others, providing many breath holding moments.
The ending of the story is pleasantly fulfilling; I didn’t feel disillusioned about waiting for the cliff hanger to be resolved in the following book, although there is a strand in the last few pages that will probably be the main story in the next book.
This book is definitely worth reading. It’s  a fast paced twisting rollercoaster of a read. An excellent dystopian debut from a rising talent. I look forward to reading more about Jenna in the future.
at April 19, 2013