11 Days To Go - The Maze Runner by James Dashner

There are only 11 days to go now until the release of the The Maze Runner movie. As part of the blog tour to celebrate this, I have written my review of the book below. The book has been republished with a new cover to tie in with the movie and is out now in paperback (£7.99, Chicken House) 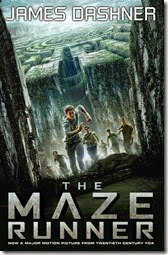 He began his new life standing up, surrounded by cold darkness and stale, dusty air.
Republished by Chicken House Books in 2014
Pages – 371
If you ain’t scared, you ain’t human.
When Thomas wakes up in the lift, the only thing he can remember is his name. He’s surrounded by strangers—boys whose memories are also gone.
Nice to meet ya, shank. Welcome to the Glade.
Outside the towering stone walls that surround the Glade is a limitless, ever-changing maze. It’s the only way out—and no one’s ever made it through alive.
Everything is going to change.
Then a girl arrives. The first girl ever. And the message she delivers is terrifying.
Remember. Survive. Run
******
If I’m honest, I really struggled to get into this book. I found it really difficult to connect to a character who didn’t have a clue who he was or where he was from, finding himself in an unnatural environment.
However, due to the high amount of praise this story had already received, I persevered and  I am grateful that I did. Once you find your bearings in this book, you are caught up in a sinister, gripping and fast paced escape which sends your blood pressure through the roof.
Thomas is a strong, independent character and right from the start, you get the feeling there is more to him than being just another newbie to the Glade. He has that Neo from The Matrix vibe running through him. He is special, but we only realise just how important he is on the arrival of Teresa, the only girl to ever enter the Maze.
Once this story really gets going, it sets off at a frightening pace. The Glader’s lives are under threat; everything they have ever known is about to disappear. There are extremely frightening encounters with Grievers, where I found myself holding my breath.
The book ends on a bit of a cliff-hanger, which leaves the story open to the sequels which have been written.
I think the best way I could describe this book is perhaps as a futuristic version of The Lord of the Flies. If you are looking for a new dystopian world to enter, then this book is definitely for you. Though you need to be prepared to cope with the uncertainty at the beginning of the book.
After reading it, I definitely want to see the movie and I will be queuing up like everyone else when it opens to see this fast paced thriller in real life action.
at September 29, 2014