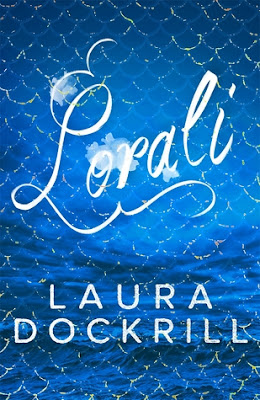 They had promised me everything on my tapestry. I would wear it forever. I was going to change. Transfer.From the white-translucent-slip I wore now: the tail that looked as though it belonged to any nameless fish in the underbelly. And I was going to realise. Become. I was going to resolve I was to be cleansed as something. For real. I would have an identity.

Summary
Looking after a naked girl he found washed up under Hastings pier isn't exactly how Rory had imagined spending his sixteenth birthday. But more surprising than finding her in the first place is discovering where she has come from.
Lorali is running not just from the sea, not just from her position as princess, but her entire destiny. Lorali has rejected life as a mermaid, and become human.
But along with Lorali's arrival, and the freak weather suddenly battering the coast, more strange visitors begin appearing in Rory's bemused Sussex town. With beautifully coiffed hair, sharp-collared shirts and a pirate ship shaped like a Tudor house, the Abelgare boys are a mystery all of their own. What are they really up to? Can Rory protect Lorali? And who from? And where does she really belong, anyway?
****
It is very rare for a book to send shivers down my spine, but this one most certainly did. The pacing towards the end of the book had me on the edge of my seat, just as though I was watching a movie. The whole scene on water is like an epic battle straight out of the Pirates of the Caribbean.

But I'm moving far too ahead in the book, so let me take you back to the beginning. Right from the start you have an inkling that Lorali is no ordinary mermaid, but you can't for the life of you put your finger on why that might be. And Laura Dockrill, keeps you waiting to find out. Told in first person in multiple viewpoints tightly contained in short, sharp chapters, the story of Lorali and her need to surface comes alive. I loved Lorali, but I loved Rory even more. He is the type of boy you really hope your daughters will bring home. Such a caring and considerate lad. I adored the personification of the sea - I really think the author got it spot on, describing it's vastness and it's ability to be everywhere.

I loved the way social media was used within the book, highlighting how easily teenagers follow, even in a fantasy novel. It gives a light hearted touch to the dangers of social media, while at the same time reflecting the harshness of the 24-7 aspect of social media.

When Laura writes, her poetic nature flows beautifully through the pages. Strongly flavoured with metaphors and similes, I f0und this book to be easily devourable.

This might be Laura Dockrill's first YA, but you wouldn't think so. By the way she writes, you would think she had been doing it for years. This book is amazing, clever and very different from anything else I've ever read. From the slick pirates, to the media grapping mermaid, the characters are both unusual and unique.

This book may be funny at times, but it holds a deeper meaning. It shows that we are all allowed to be different. We are not sheep, we do not need to follow the crowd. We can be ourselves without it being anyone else's business. Embrace your uniqueness!

I almost want to put money on this book winning awards this year.