I Have A Hunch Blog Tour with Jeremy DeCoursey

On the blog today, I'm pleased to welcome debut author, Jeremy Decoursey, who has recently published his first children's book, I Have a Hunch. 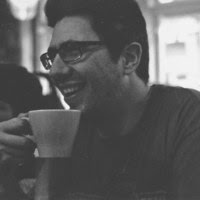 Congratulations on publishing your first children’s book! Please can you summarise I Have a Hunch in 10 words or less?
A fast paced detective novel you can kill time with.

What was the inspiration behind I Have a Hunch?
I was inspired to write a mystery whilst working on the BBC adaptation of Sherlock. The idea of a detective who happened to be a hunchback, and have the phrase “I Have a Hunch” tickled me quite a lot. Actually I was surprised that no one had ever written a story about it. From there, Humphrey Bach was born. After plotting a story in my head for what felt like years, I finally voiced it to a couple of friends.

Are Alice and her Uncle Humphrey based on anyone you know?
They aren’t based on anyone I know, but they are a mixture of characters I have read and loved. The more I wrote them, the more they became their own. However, there are characters throughout the book vaguely based on people I’ve worked with. I’m not going to name them here though as they might not be happy.

Alice loves Instagram, which turns out to be an asset in fact. What is your most liked Instagram photo?
My favourite picture changes from trip to trip. Over the New Year I was lucky enough to be in Amsterdam and I visited the Van Gogh museum. It was packed full of people, however there was a very brief moment where only one person was looking at Van Gogh’s ‘Sunflowers’, I snapped the below picture.

There are a lot of ‘hunches’ throughout the book. Do you consider yourself to be intuitive?
I wouldn’t say I am particularly intuitive in the same way that Humphrey and Alice are. I’ve never been able to solve a crime at any rate… However, when it came to writing I Have a Hunch there were certain chapters in the book that seemed to naturally fall into place. There are also a few names which sprang to mind as soon as I had thought of the character. My favourite one is Scott Lanyard, the police inspector who works for Scotland Yard. I’ll give you a moment to realise why he’s my favourite.

The novel is written as a race against time. Do you think the readers will be able to guess how I Have a Hunch ends?
Time is a big theme in I Have a Hunch, so having the chapters build up to the stroke of midnight felt very apt. I hope that readers will be surprised by the ending, but perhaps they might use their own detective skills and have a 'hunch' of their own!

What advice would you give an inspiring writer?
Read, watch and listen to as many different types of story as you can. You never know what will add a little bit of inspiration to your idea. Once you’ve got that story burning inside you, writing it will become instinctual.

Alice’s first work experience is fairly unusual! Did you have any unusual jobs before becoming a Location Manager and Writer?
The most bizarre job that I’ve ever had is when I worked in the aquarium in Bristol. I had to dress up as the mascot, Charlie the Clownfish, and entertain the visitors.

Who was the first person to read I Have a Hunch?
An ex-girlfriend of mine, who was instrumental in helping shape it to become what it’s eventually become. We first discussed the novel while eating Chinese food in Greenwich, and I told her about the twist at the end. She gave me the encouragement to go and write it. Although we have now parted ways I will always be thankful for the support she gave me with the initial ideas.

You’re very well-travelled. Do you have plans to take Alice on any overseas cases? Where?
At the moment any mysteries I’ve thought of for Alice are firmly routed in London. This is the city I call home and it has no shortage of mysterious places. I am currently planning the sequel to I Have a Hunch, and there is going to be a lot more of the capital within it. If I do take Alice and Humphrey overseas though, I think I would have to take them to a lovely beach resort to solve a mystery – they might be able to relax.

How do you treat yourself after a day (or hour!) of writing?
Well I don’t have a sweet tooth; I have thirty two of them! You’ll find me munching on a biscuit or cake once I’ve finished writing something I’m happy with. Even if it’s just a sentence.

Which Harry Potter House do you belong to?
If I was ever lucky enough to go to Hogwarts I would be a proud Gryffindor. Although if I went to Ilvermory, I would have been in Thunderbird House.

Harry had Hedwig. If you went to Hogwarts what animal would you take?
I would probably take a toad. They’re under-appreciated. 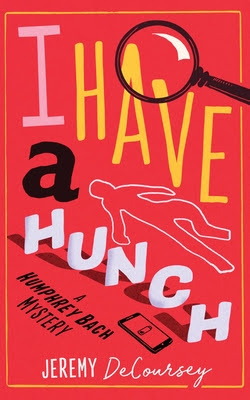 Jeremy DeCoursey grew up in Weston-super- Mare. He graduated with a Triple Distinction BTEC in Film Production, before moving to London to work in the film industry. As a Location Manager, he has worked on BBC's Sherlock, Star Wars: Rogue One, Paddington, and Tinker Tailor Soldier Spy, to name a few!
Besides reading and writing, Jeremy enjoys watching films, seeing musicals and travelling to far-flung places. He lives in London and has a kitten named Artemis.
I Have a Hunch is Jeremy’s first novel for teenagers. It’s about a teenage girl called Alice who is tasked with solving a murder mystery with her Uncle Humphrey, a world-famous detective in London. I Have a Hunch is available now in paperback and e-book.
Twitter: @DeCoursey
Instagram: jeremy_decoursey
at February 17, 2020

Email ThisBlogThis!Share to TwitterShare to FacebookShare to Pinterest
Labels: author interview, debut author, detective novel, i have a hunch