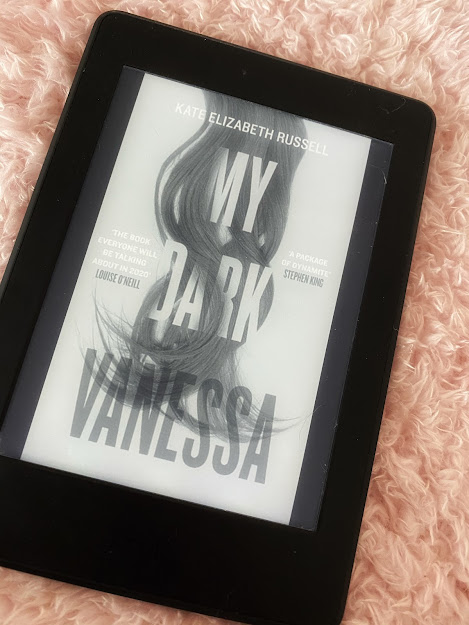 I was in two minds whether to read this book, knowing the story was based on a relationship between a teacher and a student. I can't read books about abuse in any shape or form, but the reviews kept appearing and everyone was telling me how good it was, so I decided to read it, knowing I could stop if it became too uncomfortable.

The book is written in first person and flits back and forth between the present and the past. Vanessa is in her second year of boarding school and she is feeling extremely lonely since falling out with her best friend, Jenny. She wants what Jenny has; her relationship with her boyfriend and Vanessa appears to find that with her mature English tutor, Strane.

Through out the book, it feels like there is a fine line as to whether Vanessa provoked her teacher, or whether he groomed her.  The way he talks to her and fusses over her,  I could understand how she was completely misled. She talks about how the relationship began and how even now, in her thirties, she still has contact with Strane. Yet, as a reader, you have to take into consideration that Vanessa was only fifteen and her mind wouldn't have developed enough for her to necessary understand what was happening to her.

As new allegations arise about him in the present, Vanessa starts to question how the relationship actually started and flowed. Her life had descended into a dull void, but it wasn't just Strane that made that happen. There were other events, which are revealed throughout the book, that added to Vanessa's life spiralling downwards.

By the end of the book, I felt it was up to the reader to decide what you thought actually happened. Personally, I felt that he did groom her, as he was very clever at making her feel special and loved. Even though his methods from the very start were subtle, he managed to manipulate her thoughts and feeling enough, to make her believe she had actually started it all.

My heart went out to Vanessa, even though she came across as quite a unlikable character at the beginning, but I soon realised that it was because of what she went through. I felt so angry with her mother, who appeared to have an inkling as to what had happened, but never acted upon it. I got the impression, that she hoped it would just disappear.

This book was extremely difficult to read at times, especially as a mother. I found myself uncomfortable with it on quite a few occasions. However, I think it's an important read and one that should be discussed. If that is how children are groomed, then they need to be made aware of how subtle this type of person can be. It comes across as brainwashing. I'm so impressed by the author's ability to deal with such a traumatic and sensitive subject.  A truly outstanding debut that needs to be read. An ideal reading group choice.